A couple of year ago Ola Ellnestam invited me to visit Agical in Stockholm for the day. One of Ola’s colleagues came up with an amazing insight. When considering whether someone is in conflict or collaboration with an idea, you need to consider both “behaviour” and “intent”.

All snake oil purveying consultants have a two by two grid. This is mine… 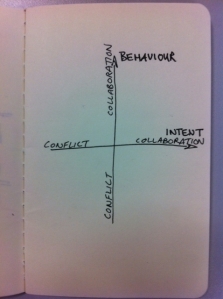 Intent forms one axis whilst behaviour forms another.

“Intent” indicates the allignment of the individual or sub-group’s goals with the goals of the larger group.

“Behaviour” indicates how the individual or sub-group behaves towards the larger group.

An individual’s behaviour is not necessarily a true indication of their intent.

Last week, Dave Snowden said that organisations should seek out cynics because they care, whereas those who agree are simply corporate survivors. This gave me the name for one of the quadrants. When an individual’s intent is to collaborate but their behaviour appears to conflict, they are a cynic. They are one of the staunchiest allies of the group and are prepared to incur personal (social) loss for the benefit of the wider group.

I quickly made up titles for the other three quadrants (until someone comes up with a better name). 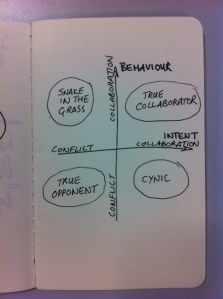 “True Collaborator” and “True Opponent” are individuals whose intent and behaviour are alligned. They can be considered to have integrity.

Cynics do not have integrity but they suffer for the common good by raising unpopular objections. Cynics prevent us from the falling into the Abalene Paradox and other similar types of group think by challenging the group’s thinking. Cynics often sport a fetching black number from De Bono’s milliners.

The most damaging quadrant are the “Snakes in the grass” . These are those individuals who behave as if they are collaborating with the group but have their own interest as their primary concern. They will collaborate while it suits them but are allways following their own agenda.

For the Agile Community, the manifesto is a call to arms to create an experiential learning community. A community that learns by doing, that test new theories in the work place.

The True Collaborator and True Opponent are fairly easy to identify. The Cynic can easily be confused with a True Opponent but a closer observation will indicate otherwise. The cynic will often have outspoken views against the group whilst at the same time maintaining strong social ties.

The hardest to spot is the “Snake in the grass”. The snake in the grass will have strong social ties with the group and will engage in collaborative behaviour with the group. When they act against the group, they will do so in secret to prevent damaging their social standing in the group from which they derive benefit. The interesting thing about the snake in the grass is that self interest will drive them in all our their social groups. If they engage in secret behaviour in one group, it is likely they will do the same in other groups. ( Liz Keogh introduced me to a great book called “Snakes in Suits” that talks about this. )

The reality is that we rarely look for enemies in our own group. Especially when we are already aware of other competitors.

So how do we spot the snakes in the grass?

It is important to understand the difference between behaviour and intent.

I will now don a mask, turn my back and crawl under the table as the ritual dissent begins. (Of course the great thing about ritual dissent is it gives everyone a vioce, even those with negative intent.)

Currently an “engineering performance coach” because “transformation” and “Agile” are now toxic. In the past, “Transformation lead”, “Agile Coach”, “Programme Manager”, “Project Manager”, “Business Analyst”, and “Developer”. Did some stuff with the Agile Community. Put the “Given” into “Given-When-Then”. Discovered “Real Options” END_OF_DOCUMENT_TOKEN_TO_BE_REPLACED
This entry was posted on Friday, February 24th, 2012 at 1:15 pm and posted in Uncategorized. You can follow any responses to this entry through the RSS 2.0 feed.
« Ritual Dissent
Feature Injection, The Meme Lifecycle and Serendipity »

13 responses to “Intent and Behaviour”